The tape library line includes a midrange solution with support for up to eight drives and 9.

The Scalar also supports ADIC Scalar 1000 Library drives, but they are not included in this report. Since that time ADIC has continually added support for the latest tape technologies and integrated storage networking capabilities that allow for easier integration and management within a Storage Area Network SAN infrastructure. 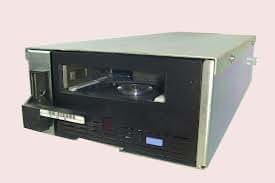 The Scalar consists of a single base control module and up to three additional expansion modules, which join with the control module to form a single integrated library. Since the different drives supported vary in physical size, the number of drives and cartridges supported also vary, resulting in different overall capacity and performance figures depending on the tape format selected and the number of drives installed. The Scalar 's modular architecture allows ADIC Scalar 1000 Library gradual expansion, making it economically efficient for a wide spectrum of storage environments.

The Scalar control module can function as a stand-alone tape library allowing it to fit easily into smaller enterprise installations with provisions for expansion as backup demands increase. When capacity or performance requirements call for growth beyond the base control module, expansion modules are added.

The Scalar grows using a scalability system that maintains a single robotics mechanism and uninterrupted interior library space for all library models. It does not use pass-through ports when moving storage media between modules.

Instead, as expansion modules are added, the bulkhead is moved to the end of the last module and the robotic rails and cables are extended across the added expansion modules. This design eliminates mechanical complexity, reduces expansion costs because the expansion modules do not require separate robotics or pass-through ports and increases overall reliability.

As modules are added or upgraded, the Scalar automatically reconfigures itself, performs a ADIC Scalar 1000 Library of self-test diagnostics and upgrades system settings with the new configuration information. Scalar control modules vary in capacity, number of drive bays, and available mailbox slots which are used to load and unload data cartridges while the library is in operationdepending on the drive technology implemented. Likewise, expansion modules vary in capacity and in the number of drive bays.

ADIC Scalar 1000 Library The variations are a result of the differences in the form factors of the supported tape drives and storage media; the net effect to the customer is that control modules and expansion modules can be configured with a combination of drives and data cartridges that allow for a balancing of performance and capacity. For capacity-centric installations, expansion modules can be configured to house cartridges only. Drives are installed using hot-pluggable drive carriers, and a second power supply can be added to both control and expansion modules for a redundant power source ADIC Scalar 1000 Library the event of a failure of the primary supply.

A bar-code scanner is included as a standard feature on all models.

The scanner is used to read information from bar-code labels on the data cartridges into the library's inventory database. A Scalar AIT control module supports a maximum of 12 drive bays and can hold up to data cartridges.